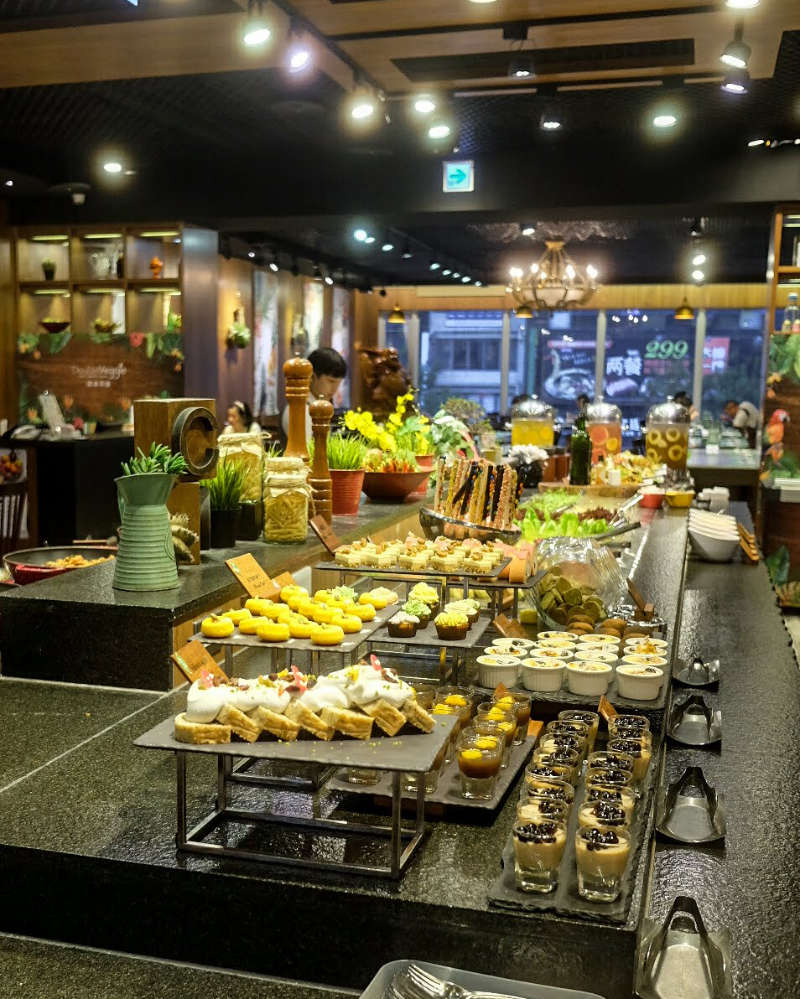 In this post, I’m going to compare two biggest all-you-can-eat vegetarian buffets in Kaohsiung. The categories in this showdown are:

Food (Variety and How Vegan-Friendly)

Fruitful Food is a big restaurant with a wide variety of food. There are Japanese, Western, Chinese cuisine and more. From Japanese tempura and sushi, to Chinese dim sum and stir-fries, you will be full just by trying everything once.

In my two visits, about 60-70% of the food is vegan. Given the wide variety of food, there are quite a lot for vegans to choose from.

The vegan options are clearly marked, including drinks, sauces and condiments. Other than the milk and egg, be careful of honey, which luckily they also mark for food that contains it.

If you are like me and can eat food with 5 spices and alcohol, you would only need to avoid symbols of 蛋 (Egg), 奶 (Milk) and 含蜂蜜 (Contains honey).

Some notable features (at the time of visit):

In general, Double Veggie is a good vegetarian buffet with some good vegan options. However, in some aspects, it feels like this buffet is catering more towards vegetarians than vegans.

The amount of food is good. You can find Japanese (sushi, tempura), Western (pasta, stews), and other dishes like curry, noodles, desserts, etc here.

About half of the food is vegan. But because the size of the restaurant is smaller than Fruitful Food, only about 25-30 items are vegan at the time of visit (weekday dinner).

In general, the dishes are clearly marked. However, during my two visits, once breakfast (not veg, more on that later) and once dinner, there are sauces and toppings are not marked, some of which are not vegan after enquiring the staff. Comparing to Fruitful Food, the labelling system doesn't seem to be as detailed and accurate.

The two options vegans can go for are 全素 and 五辛素.

Some disappointing misses at the time of visit:

Another note is that in the morning, this buffet serves meat. About 30% of food is vegan, which include some noodles, rice, and other simple dishes. Most things are marked clearly, and each dish gets its own utensil so cross contamination is not too likely.

Both restaurants have great service. All the staff I’ve seen are polite and helpful. They are also efficient in taking away the used dishes.

Both restaurants are modern, bright and clean. Comparing the size, Fruitful Food has about double the amount of seats than Double Veggie.

For Fruitful Food Buffet, you would need to take the red metro line to Kaisyuan Station and change to the light rail to Dream Mall Station. The buffet is on the 3/F of Dream Mall.

So there you have it, a comparison of the two veg buffet in Kaohsiung. If I have to pick a winner, it will be Fruitful Food in Dream Mall mainly because of its wider variety of vegan selection. That being said, both buffets are worth a try if you have the time.