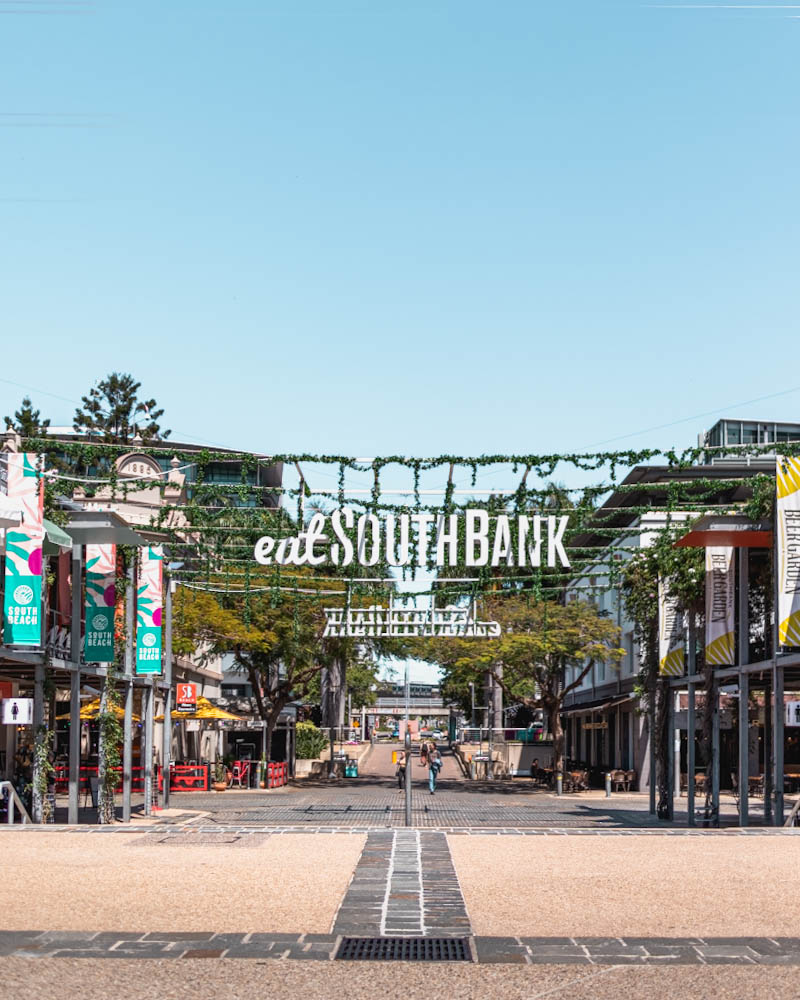 Best Vegan Food In The Area

Grassfed is an all-vegan restaurant on Fish Lane, South Brisbane. You will find epic vegan burgers and loaded fries here like this BFC burger with double cheese and double vEEF patty. It will satisfy all your burger cravings.

Located next to Musgrave Park, Greenhouse Canteen has a menu that is all vegan and gluten-free. Some standout dishes like the mushroom cheeseburger and chickpea fettuccine.

At the time of writing, they offer AU$5 tacos on Tuesday. They are full of toppings and are very delicious.

A modern vegan cafe that focuses on sustainability and seasonal produce. Delicious food, friendly service and relaxing vibes. The brioche French toast is a must-try.

A plant-based vegan Italian restaurant. The pizza base and burger buns are freshly made in house. Try the magic mushroom pizza and tiramisu is you are here the first time.

A Taiwanese vegetarian restaurant with many vegan items. Reasonable prices with generous portions. Two dishes here that I love are rice with bean sauce and beancurd wallet & veggies.

A vegan tapas style restaurant with a backyard garden. Lemon meringue and the cauliflower wings are some of the stand out dishes.

Upstairs Indian eatery with many vegan options. Try their feast for a bit of everything, including their curry and koftas. Great value and overall friendly service.

An acai bar with build-your-own bowls and smoothies. Prices are a bit higher but delicious acai bowls. Go for the combination of peanut butter, strawberry and granola if it's your first time here.

They recently become an all-vegan teahouse specialising in bubble teas and desserts. Try their unique soft serve ice cream flavours like taro and matcha, or one of their cream filled mochi balls.

A Chinese restaurant with an extensive vegan menu. Some great options include rice paper roll and sweet and sour chicken.

A Japanese restaurant with a big vegan menu. Vegan bento boxes are a great way to try many of their vegan dishes like tempura, croquette and gyozas.

Restaurant in West End specialising in wraps. The satay tofu wrap and falafel wrap are great. Keep in mind that you would need to specify vegan when ordering and the vegan wrap is $1 extra.

A restaurant chain specialising in Greek wraps. They recently released a vegan range with 100% Not chicken and lamp. The Pythagoras vegan chicken wrap is a great choice.

A health food bar with many vegan options. The Ferrero acai bowl is a healthy tasty choice.

A doughnut shop with a few vegan options. The doughnuts have a bread-y texture and are very filling. Red velvet doughnut with cookie frosting "Liam Hemsworthy" is recommended.

A dessert shop with vegan churro, ice cream, thick shake and more. Food generally tastes good but this Southbank branch is sometimes not consistent in the food quality.

A Mexican chain with dishes that can be made vegan. Sauteed vegetable and shredded mushroom are the two vegan filling. To make it vegan, substitute cheese with vegan chimi mayo for free.

Cool down with a gelato pop at Happy Pops. They have some vegan options including hazelnut & chocolate and mango & coconut yoghurt.

This coffee shop is located next to The Wheel Of Brisbane. Get a coffee or vegan shake here and enjoy the beautiful view. They also have some vegan food options like vegan doughnuts.

A poke bowl shop on Grey Street with some vegan options. Either go with the vegan Tinie Tempeh bowl or build your own with vegan ingredients.

A funky made-to-order ice cream shop with some vegan options like matcha and choc oreo.

This craft beer bar has clearly-marked vegan options. You can find dishes like vegan chicken burger, crumbed mushroom here. At the time of writing, they do $3 tacos on Taco Tuesday.

A dessert bar with a vegan menu. The desserts are not the most exciting for me as they are mostly fruit- with dark chocolate-based.

You can find a few vegan options here like teriyaki noodles and spring rolls. The value is not the best and the portion is quite small.

Not many vegan options here but you can get the vegetable gyoza here if you are really craving it.

The vegan menu include vegan ramen, gyoza and curry rice. The ramen is delicious with a deep-flavoured broth.

A vegan Mexican restaurant with a seasonal menu. The value is not the best, and the tacos are rather small for the price.

An ice cream shop with good vegan options. All their sorbets are vegan, including the delicious pandan+coconut milk and salted coconut+mango salsa. The cone is vegan as well.

An Indian restaurant with vegan options. Vegetarian options that are marked dairy free (DF) are vegan.

Some vegan options available including vegetarian pizza with a vegan cheese add-on.

Coffee chain with vegan drinks with vegan whipped cream. You can also find some vegan sandwiches, wraps and some desserts here.

Try their hot chocolate or mocha with 70% chocolate with oat milk. Very rich and delicious. They also have some vegan cakes and toasties available.

A ramen shop with one veganisable option - vegetarian miso ramen - if you get rid of the butter. I would recommend going to Taro's Ramen or Okuman Karaage and Ramen Bar instead.

This cafe on Melbourne Street has good vegan options, including zucchini fritters, nachos, and milkshakes made with vegan ice cream.

An acai bowl bar with mostly vegan options. They also have vegan desserts and treats in the fridge cabinet.

Despite the name Veganism Pizzeria, it's a pizza shop that also sells meat. Vegan menu available with good options.

A poke bowl shop with some vegan options, including the tofu bowl with pickled ginger and miso tahini.

This pie shop has a few good vegan options - including a meatless mince pie made with eggplant, tofu, mushroom and walnuts, and a Ratatouille hand pie with veggies and vegan cheese inside.

Affordable Indian place with vegan options like samosa and curry.

A restaurant focusing on produce from local farmers. There are some vegan options like sunflower seed satay noodles. The prices are on the higher side.

A restaurant and bar on Boundary Street with clearly marked vegan options including pizza with vegan cheese option and plant based cheeseburger.

Asian restaurant on Boundary Street with a vegan banquet available.

A local pizza shop with a vegan range that uses vegan cheese. Value may not be the best and the pizzas can be quite small.

Domino's Pizza has a vegan menu including vegan cheese pizza and cheesy garlic bread. In general it's pretty good and nostalgic. I like the beef & onion pizza the best.

Thai restaurant on Boundary Street offering some classic Thai dishes like laksa and som tum. Vegan options are clearly marked on the menu. 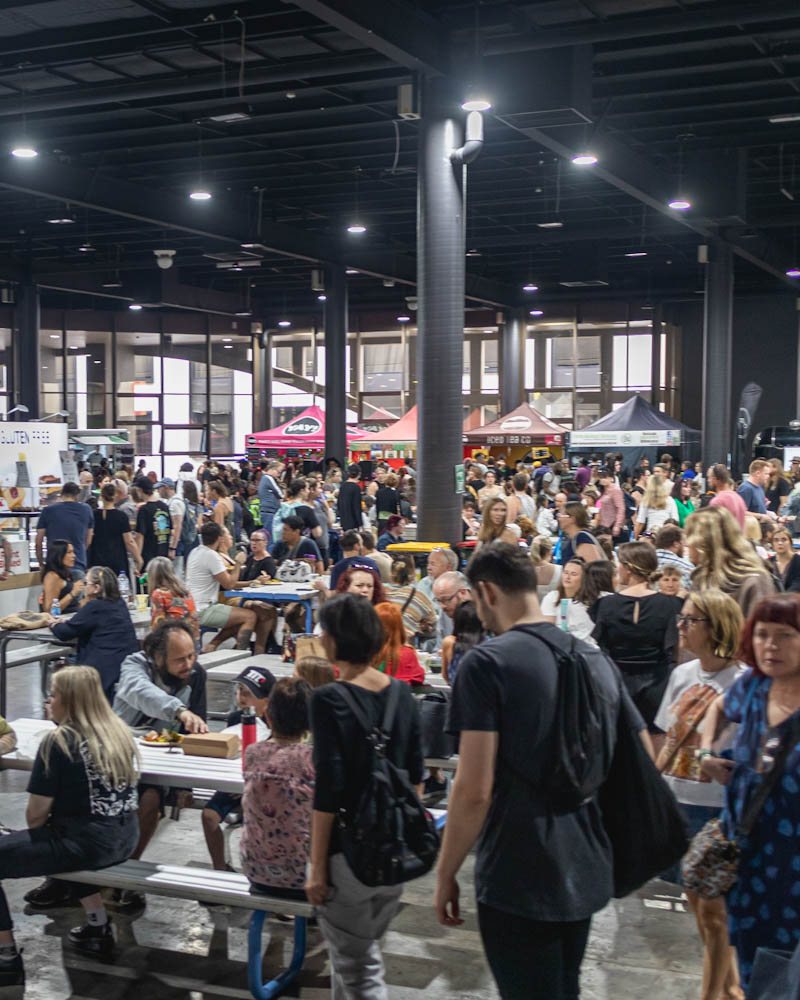 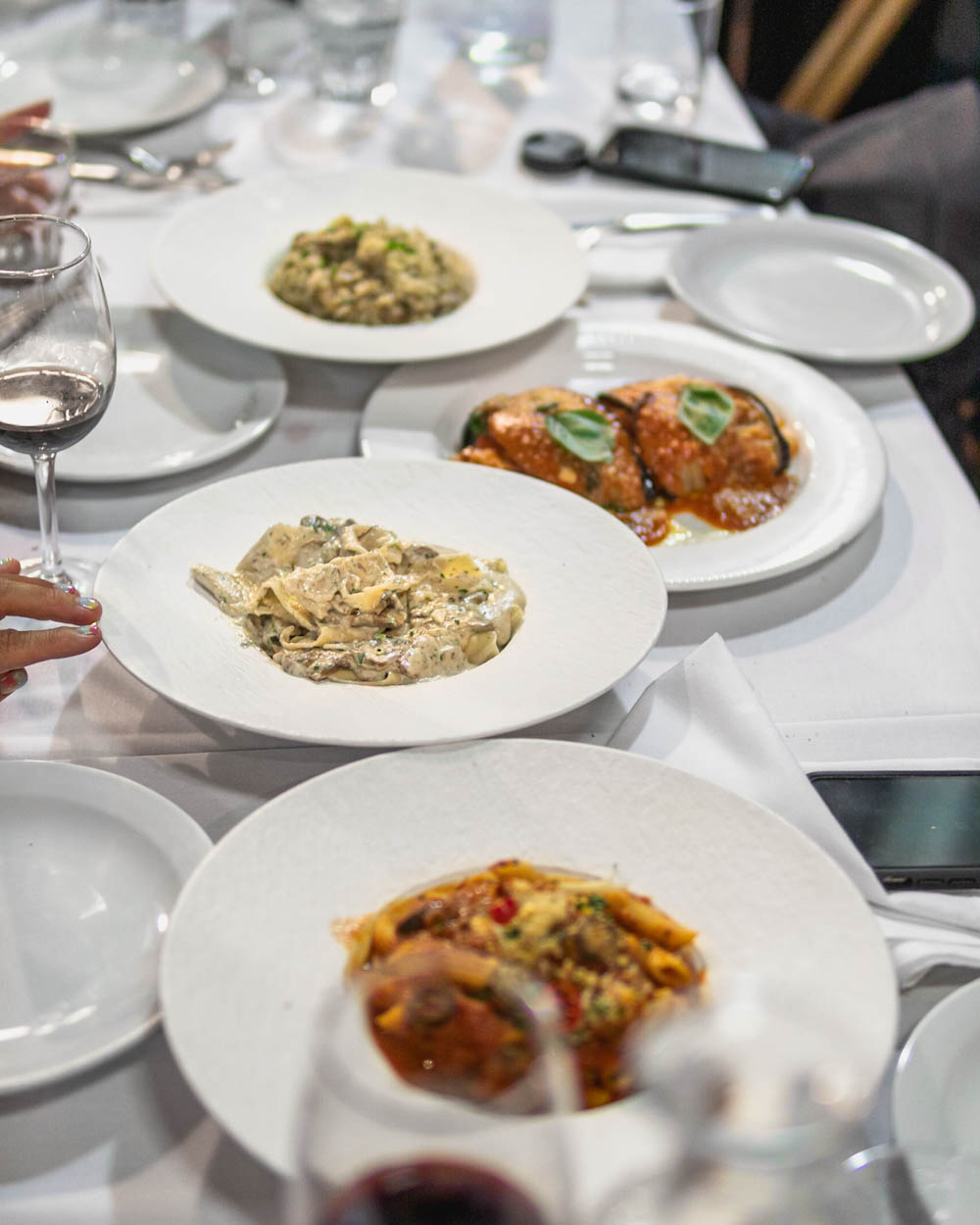 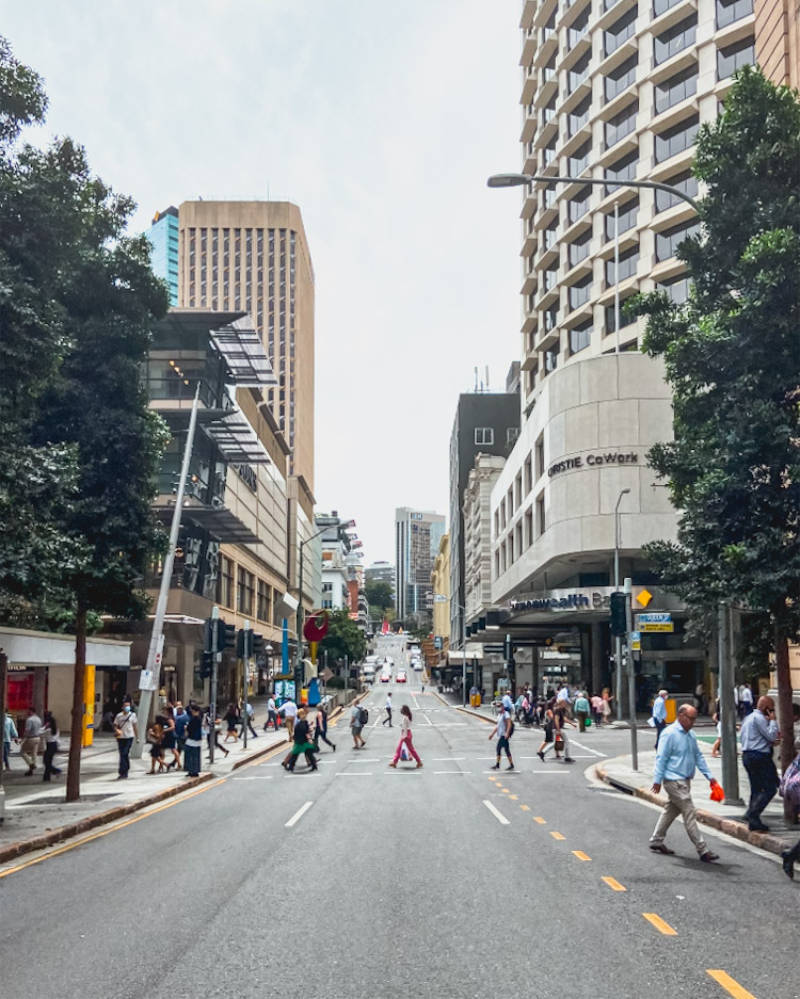 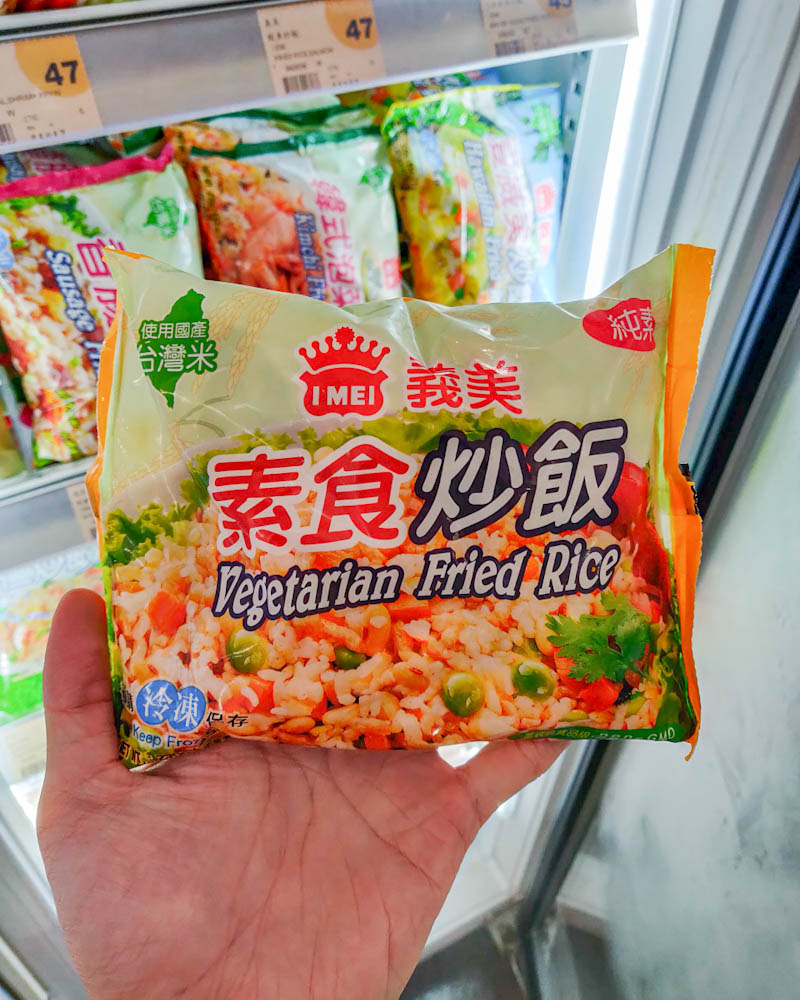 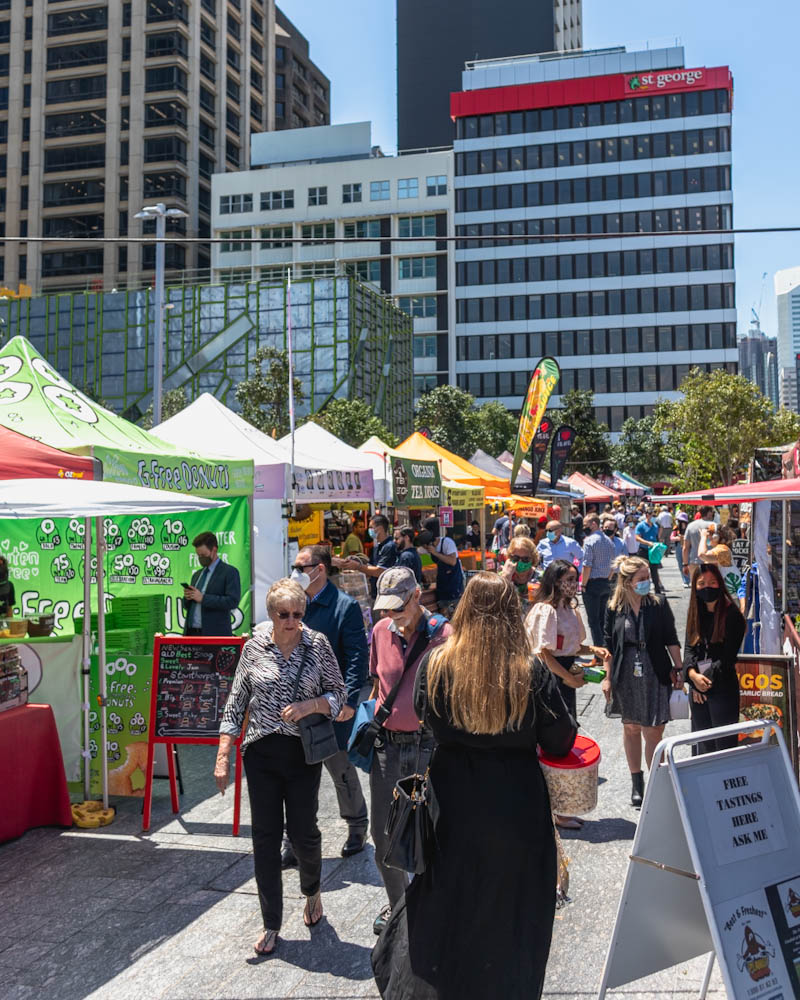